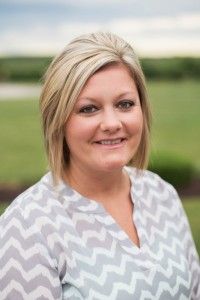 "Hi! My name is Destiny Bader and I grew up in southwest Nebraska in a small town called Benkelman. I loved growing up there and felt there was such a sense of community that helped shape who I am. I was involved in many activities growing up and knew I wanted my children to have a similar upbringing.

I remember wanting to be a nurse from the age of 9.

I had several nurses in my family already and I knew I wanted to “help people.” Something every nurse wants to do! I attended college in Kearney and graduated from the UNMC College of Nursing in December of 2003.

There were so many choices for career opportunities at that time but I knew I wanted to work at Bryan on the cardiac floor. I spent many days there my last year of nursing school, not for clinicals, but because my grandmother was very ill and I spent most of 2003 in and out of the facility. I really grew fond of the staff and overall atmosphere. I remember thinking, "This has to be a great place to work!" In January 2004, I began my career there as an RN. I worked there full time until August 2007 and then became part of the registry staff allowing more flexibility with my schedule. I had my first son the year before and wanted to spend more time at home being a mom.

About a year later, I also started working PRN at SMC on the floor and ER. I loved the variety of work and especially loved the people I worked with. I gained so much knowledge and saw things with a different set of eyes. I was no longer that nurse at the larger facility having misconceptions about small town nurses. I was living it now and had a new found respect for what all they had to do. Soon I wanted to try the surgery world and began working at a surgery center in Lincoln in 2010. I worked there for about two years. This was a great experience, and I learned a lot, especially in the care of pediatric surgical patients.

When I discovered SMC was hiring in their surgery department, I thought, "What a great opportunity." The department was growing and I wanted to be a part of it! I started in 2012 and absolutely love my job! We continue to add new providers, expanding our ability to serve patients of SMC. All the staff work together as a team to provide the best possible care for patients and their families. In 2018 I took the position of Director of Nursing in the hospital. I am honored to be part of the SMC team!

I look forward to serving and caring for you!